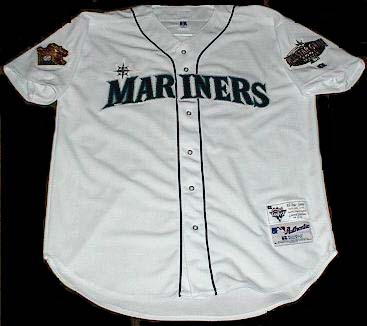 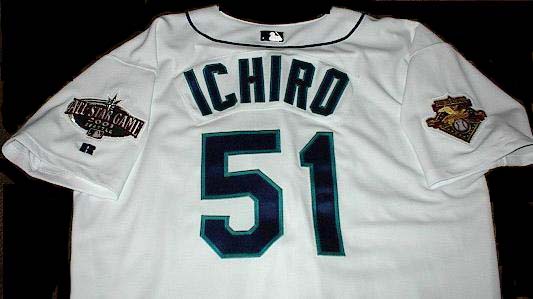 As a promotional one-day event in their exhibit area at the 2001 John Hancock All-Star FanFest, Russell Athletic announced a special All-Star Game Limited Edition Ichiro Jersey. This offer existed ONLY on July 10, 2001. No All-Star Edition jerseys were available either before or after that date, nor did they repeat this or any similar offer at the 2002 All-Star Game.

Using their basic "Authentic Collection" Ichiro (#51) jerseys — absolutely identical to ones worn by Ichiro, as well as all MLB players — a Russell employee was on site to sew a custom tag on the jersey. This "All-Star Game Limited Edition" tag, along with a standard Russell tag, were put at the lower left on the front of the jersey. 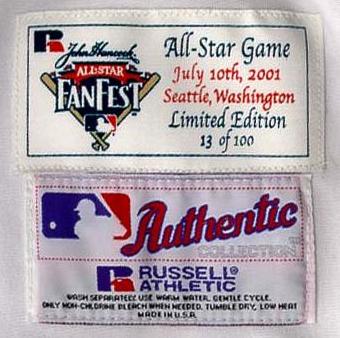 The tag incorrectly indicates an edition of 100, but no one knew that in advance. This is the quantity Russell was prepared to make — and expected to sell — thus they printed it on each tag. The tags were kept separate until the jerseys were bought and paid for, and only then were sewn on the jerseys.

At the time I ordered mine, numbers 1 through 9 were taken, as was 51 and 100. Never being one affected by triskaidekaphobia, I skipped 10 through 12 and asked for #13.

By day's end, a total of 28 jerseys had sold. Russell kept a log of each buyer, and has confirmed that only 28 All-Star Limited Edition jerseys exist. The remaining 72 tags were destroyed, never to appear on any jersey.

It is important to document this information because the jerseys with tags indicate 100 exist. Normally, one would not question such documentation. We have seen eBay sellers claiming "only 100 made," etc., when they are, in fact, understating the situation. (Obviously, new tags could not be made available, for you cannot indicate "51/28," or "100/28.")

I called Russell shortly after FanFest, offering to buy any remaining jerseys if they would sew the All-Star tags on them. Holding to their one-day-only sale promise, they declined, saying whether only 28 or all 100 sold on July 10th, that would be the end of the edition. Very honorable indeed!

One final thought: Too often we see a description of a sequentially numbered card that claims it to be "the first one made," "the last one made," etc.

It just doesn't work that way. All the cards are printed at the same time, unnumbered. After the ink dries, they are cut, and only then is any numbering done — whether by hand or electromechanically. Thus it would be more appropriate to say "the first one numbered," etc., rather than first one "made."

With such things as the All-Star Game jerseys, each one was indeed made to order — actually created one at a time. For these, one can accurately state "the first one made," etc.